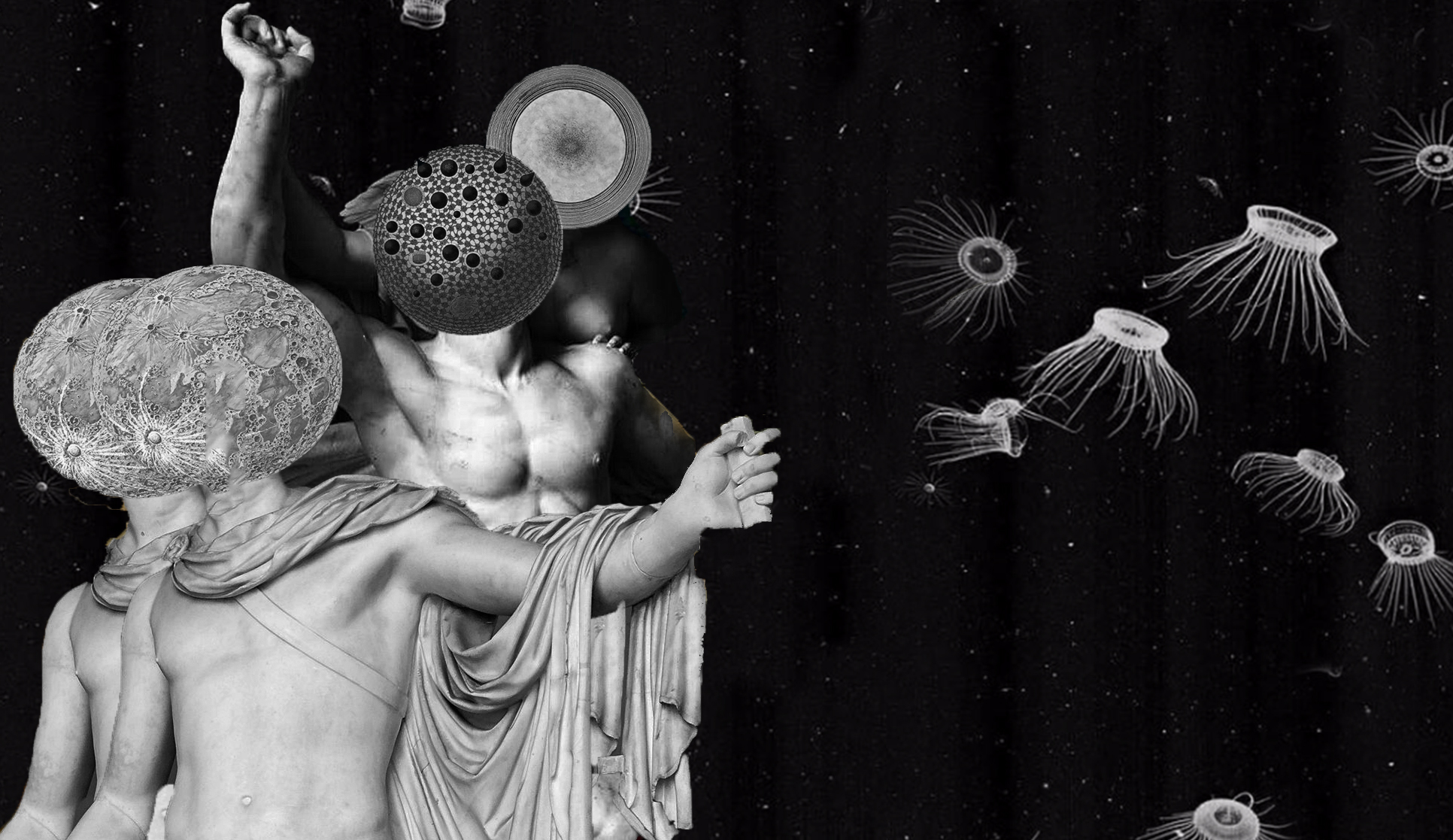 Alterity and the Axioms of Libidinal Economy

Here if you missed part I

There were, in the 20th Century, two very particular and significant events, one following – and subsequent to – the other. The first is enclosed in an image. A man, with an authoritative posture and a military uniform, wearing white gloves and a bandana, stands on the balcony of General Mashita’s office of the Japanese army of self-defense. He shouts words that, only three hundred and fifty years earlier, would have hit the mark and would have been almost banal. But times have changed. It is November 25th, 1970, and on that balcony, Yukio Mishima makes his last proclamation in front of journalists and soldiers of the infantry regiment.

We must die to give Japan back its true face! Is it good to have life so dear that the spirit dies? What army is this that never has more noble values than life? Now we will testify to the existence of a value superior to attachment to life. This value is not freedom! It is not democracy! It is Japan! It is Japan, the country of the history and traditions we love.

After finishing, he enters the office, kneels down and performs the seppuku, the ritual suicide of the samurai. Which is completed with the beheading by the hand of one of his disciples. It is the surrender of Japan to the American West.

The second moment is more difficult to render it through an image, because it is a process. The end of the 20th Century witnesses an epochal phenomenon of transformation and intensification of relations between nations, cultures and economies. With the protests connected to it, the 21st century, also thanks to the Internet, opened as the century of globalization. Everything has become faster, more fluid, and interdependent. One of the negative repercussions of globalist politics and economics has been, instead, the progressive loss of local identities. The semi-indifference to Mishima’s suicide with regard to the themes he made vibrate that day in November, by the Japanese, was a clear example. Today, Japanese culture is smeared everywhere, in every crevice left free. Mass culture, entertainment – even sexual -, literature. The West has incorporated Japan, which is now everywhere – and yet, it is no longer anywhere.

Once again, millennia after the first time, the siege by predators happened. The exotic, what “comes from outside” actually threatened the inside, and in most cases won. And it did so in the most classic way, in the most natural way, to listen to Girard: the disadvantaged looked at the strongest as a model, imitated him, and appropriated what, however, was offered to him in exchange for his own identity. The exchange was simple: you can imitate me, as long as you do it perfectly. You can have what I have, as long as you abandon what is yours. The only concession was total identification. “Once the Earth has been circumscribed as a sphere, as a finite space, through the omnipotence of the media, all that remains is the fatality of circular tourism that is exhausted in the absorption of all differences”. The traveling doctor who hated to visit had the gift of the word that does not expire.

Éditions Galilée published, in 1990, the collection of essays La Transparence du Mal. It was written by Jean Baudrillard, one of those, together with Deleuze, whom Lyotard called “brother”. Essay number four in the second part of this collection, Radical Alterity, is entitled Radical Exoticism. Baudrillard, like Segalen, travels a lot. It is always good to critically pay attention to causal links, and therefore it should be left to the free interpretation that the sociologist dedicates an entire essay to Segalen.

This is how Baudrillard’s writing opens:

In the very light of all that has been undertaken to exterminate him, the indestructibility of the Other is illuminated, therefore the indestructible fatality of Otherness. […] The radical Otherness resists everything: conquest, racism, extermination, the virus of difference, the psychodrama of alienation. On the one hand the Other is always already dead, on the other hand it is indestructible. Such is the Great Game. ( 1993, p.160)

And then he quotes Segalen: “The impenetrability of races, which is nothing but the extension to the raids of the impenetrability of individuals”(p160). Baudrillard’s choice is significant, both with regard to his own words and the words of others. Because here, the point is that there is not only an illusion of the Other as part of a tangible horizon, of the exotic as something that sooner or later will go “from outside to inside” and become interior. The point, rooted much deeper down, and son of the incestuous relationship with his brother Deleuze, is that subjectivity itself is an illusion. Why?

Baudrillard treats it as a trivial consideration: the Other is, and will always be, as irreducible as I am to myself, because I am the repetition of my differentiation. At least in theory, if you accept the game. “Discard all psychological, ideological and moral forms of the Other – discard the metaphor of the Other, the Other as metaphor” (ibid., p160). It is an attitude, that of radical exoticism, which underlies sentimental palliatives.

Baudrillard writes: the question of America’s identity is never posed; what is always posed is alienation from America. How can we decipher the identity of a people who live in the irreconcilability of voices that are so distant from one another? Simple, the hunt for what is not America is always at stake. On this it lives: on negative theology. Otherness is the sublime, and the sublime is not touched – and it is painful not because it is not touched, but because one desires to touch it. And the pain fades away when the sublime brings the body back here, where it is. To travel to a destination that we have never visited before is to find yourself in that place and no one else. “The body finds its gaze again. Freed from images, it frees the imagination”. Circumscribing the world in a sphere, and lying on it a film on which are imprinted the anticipations of the Alterity, the recursive habits; tourism of the spirit. The objective is not to recognize the radicality of the furrow that separates us from the Other; it is to make the Other recognize the furrow that, reaffirming itself, separates him from himself.

One of the most peculiar French writers of recent years is Antoine Volodine. Now in his eighteenth publication, the last in 2016 and the first in 1985, Volodine has been the cause of a major headache for literary critics with copper-colored scarves. He was asked, on several occasions, what genre his texts belonged to, according to him, in those classic interviews as much embellished as superficial. Volodine had no idea. He tried to create his own space, something new and never beaten, giving him the crown as the father of a literary current: post-Exoticism. The basic idea that pertains to this name is to go beyond the exotic genre of Conrad, for example, and the genre of the formation and introspection novel. No more exploration of the other and no more exploration of the self. Volodine explores places and humans that do not exist, it does so through classical tools, but proposing points of arrival even further away from those of departure. Writing about places and times that have never been through characters that do not represent any kind of humanity means forcing the reader. Such forcing, paying attention, is the key needed to open the gates that lead to the scenarios that Volodine narrates. Why such forcing? In what we have never seen through the words of those who have never listened, it is not possible to anticipate anything. All that remains is an abyss to be filled – and watch it escape just before it is completely filled. Radical exotism.

Attention is what you pay when you read for the first time the names of the characters in a novel, you hear for the first time the description of a place. But as in Tarkovsky, so in Volodine: the unknown name is the most familiar thing you will meet. Contemporary literature lives a moment of desaturation. In one way or another, on page forty images already seen too many times begin to besiege us. Literature explains the state of the world. At least one Radiant Terminus still remains.